Another Friday passed and another I-Land episode out!

On September 4th, 11 PM KST, the 10th episode aired and it brought much more emotion than a viewer could handle.

The 10th episode starts where we left off! The boys have successfully performed their Chemistry test stages and Jake was chosen as Producer’s pick for this round, winning him the benefit of doubling his votes for the next 24 hours.

They announced the midway point of global votes to the I-Landers, which was revealed to us at the end of the prior episode. The rankings are as followed: 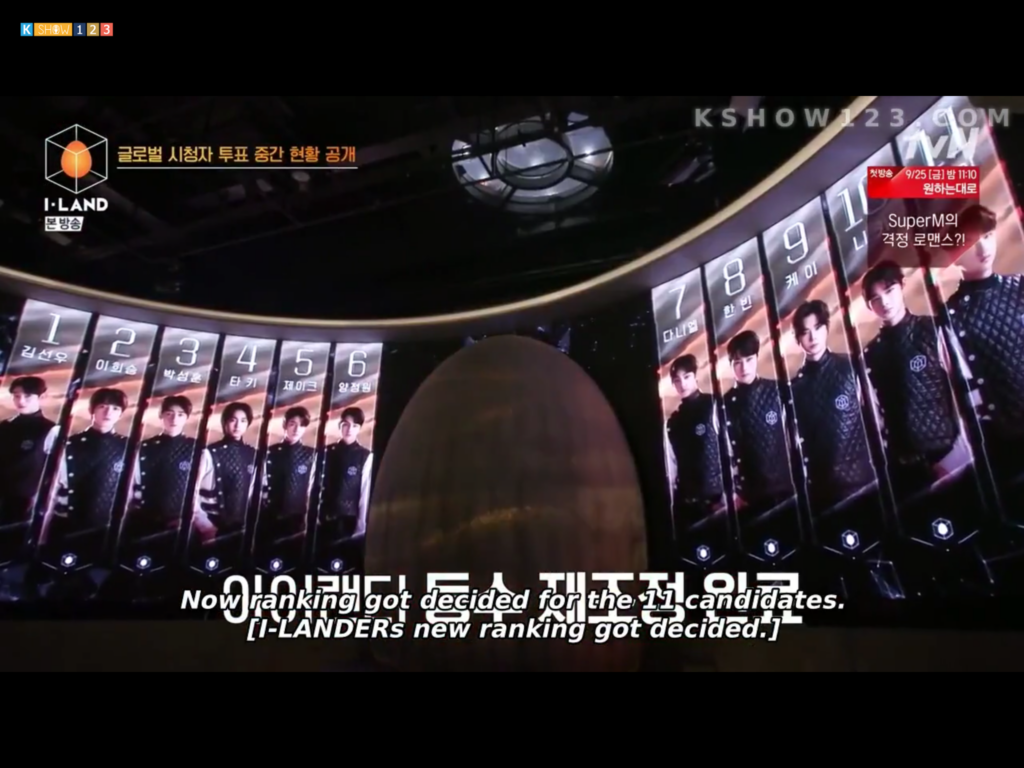 It was definitely shocking to see as an avid watcher! This was where we can clearly see how drastic rankings can change. I-Landers that have been safely riding within the top seven are now at risk of being eliminated.The I-Landers will have to work harder to appeal to the global voters if they don’t want to be eliminated.

Afterwards, the boys are given a special mission that will lead into their next test. On the screen, much to their surprise, Seventeen’s Hoshi, Dino, Jun, and The8 appeared to give details to the mission. The boys would be split into two teams to perform Seventeen’s songs for them in 24 hours. The songs chosen for them was ‘Pretty U’ and ‘Hit.’ 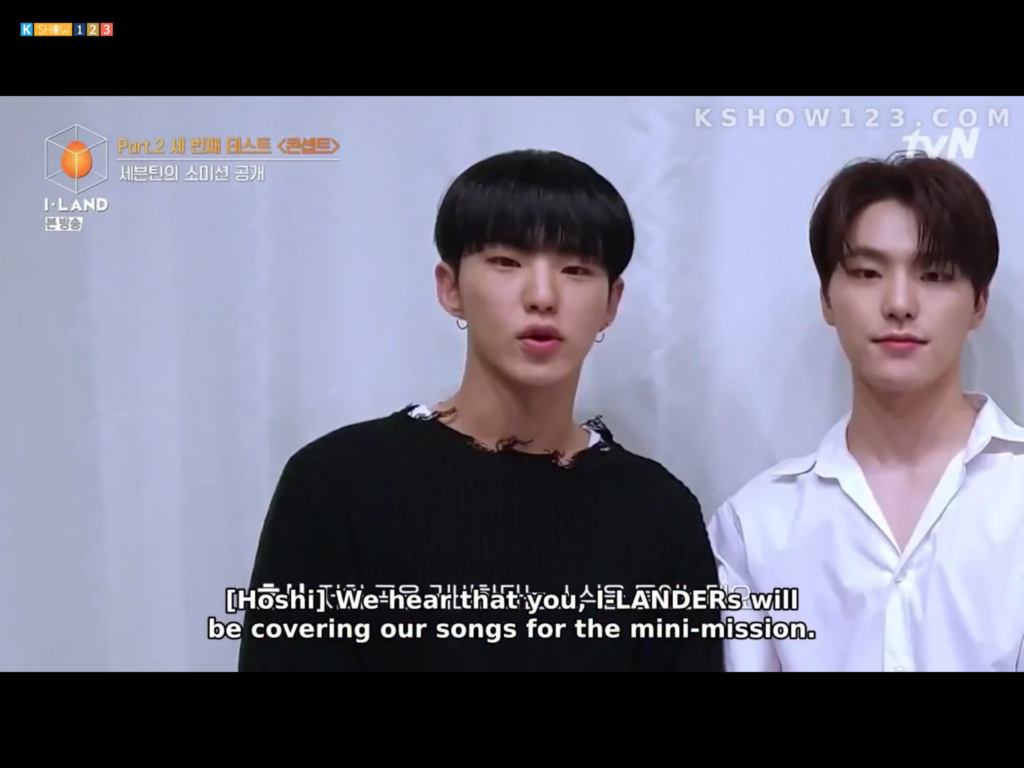 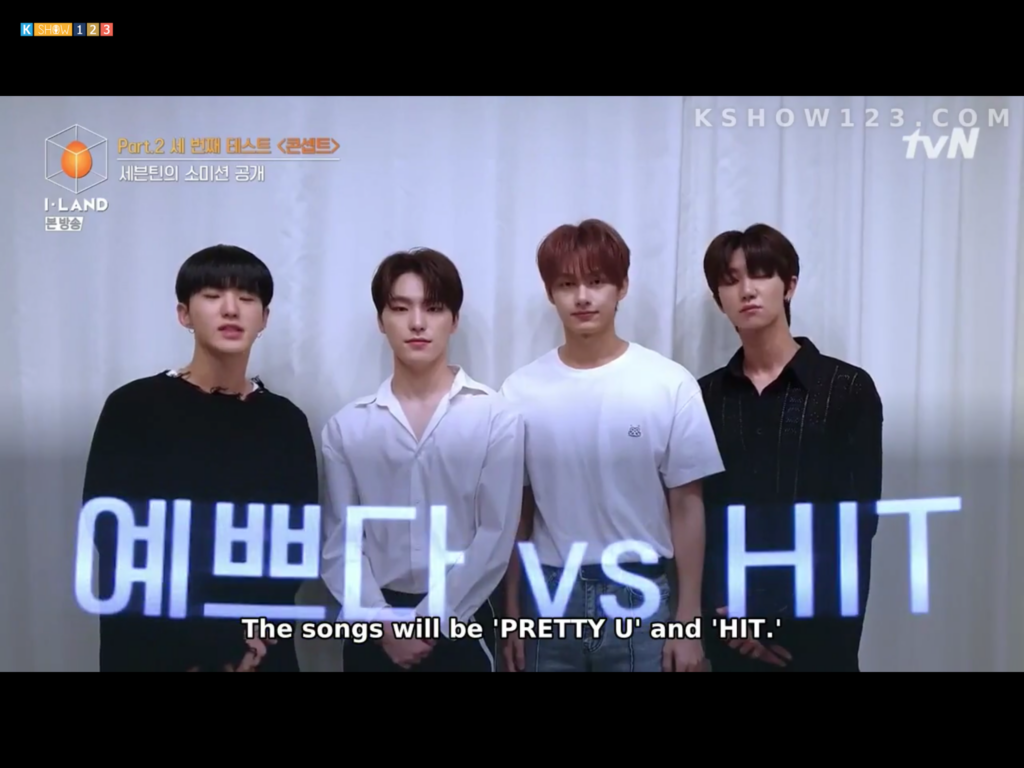 They set out to quickly practice the choreography to the two contrasting songs for their visitors.

This would be the first time we get to see a refreshing concept from the trainees, so it was something interesting to see. Sunoo and Taki were overly thrilled to be a part of ‘Pretty U,’ as they could effortlessly show off their cute facial expressions throughout the performance. It’s not the case for Sunghoon and Jake, as they cringe at the thought of acting cute.

While the 24 hours have passed, it was time for Seventeen to arrive. Hoshi, Dino, Jun, and The8 walked into I-Land and made their grand entrance while appearing in the famous, turning egg door. Once Seventeen had their introductions to the trainees, the two teams went ahead to show off their performances that was only learned within a day.

Seventeen were impressed by the hard work the 11 boys have put into their performances. In the end, Seventeen crowned the ‘Pretty U’ Team the winners of the mini mission and the overall first place I-Lander was Sunoo, who flaunted off his cute energy perfectly. The benefits will let Sunoo choose his desired song, as well as pick out the members for his team.

As a surprise for the I-Landers, fan videos for each trainee had been prepared. The videos ranged from global fans of 173 countries, who recorded themselves to show support and love for their favorites. This was something the trainees definitely needed after all the hard work they poured into making their debut.

After the fan videos, a Q&A was also prepared for the I-Landers. This section gave us a little bit of an inside look of what we’re missing as outside viewers. We were graced with the fact that Jay sleeps with his eyes open, some aegyo from Heeseung (which lead to an uproar from the others), and a great reminder of Jay’s humiliating yet amazing moments on I-Land so far. The boys were able to show off more of their special tricks and skills due to the fans’ questions. It was a fun, lighthearted moment that surely relieved some stress for the boys.

To finish up the heartwarming moment, the boys have one last surprise as they returned back to their dorms. Each member was gifted a booklet of hand-written fan letters. It was the icing on the cake to show the trainees how loved they are by their fans. 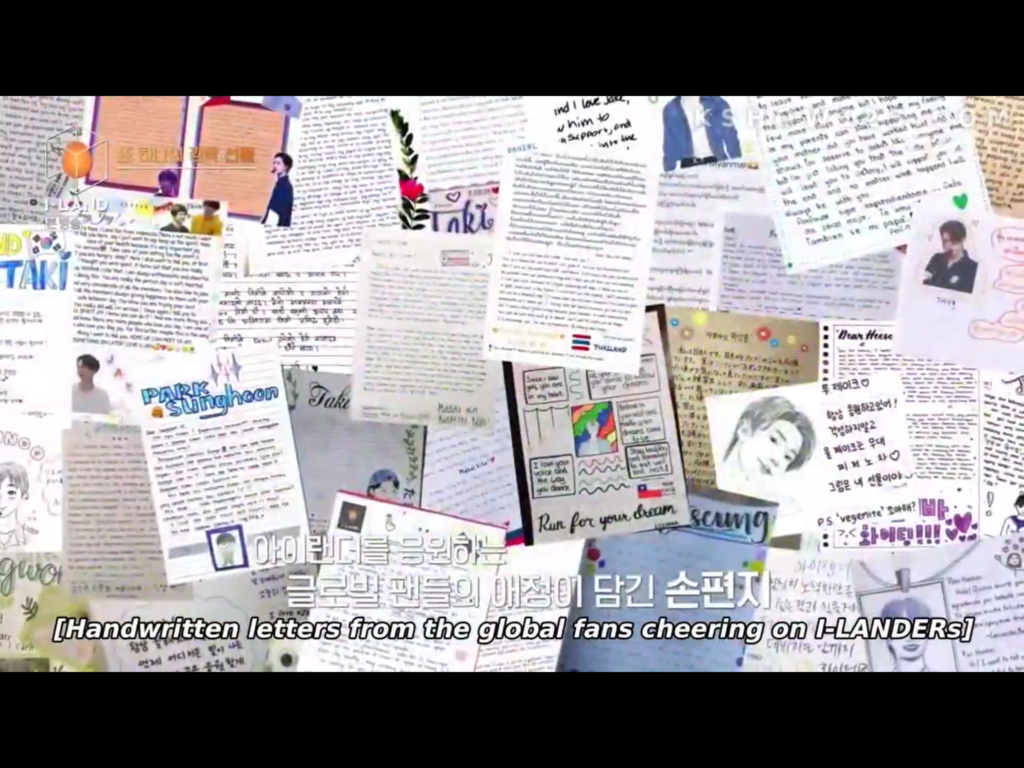 The third test was announced, in which it will be the battle of concepts, refreshing versus explosive.

They revealed their first song, Chamber 5 (Dream of Dreams). It is an upbeat and bubbly song about the delight and dreamlike feeling as they make their way to debut. The choreography caught their attention as it showed off a lot of cuteness and includes pillows and blankets into the performance. Their second song, Flame On, definitely is at the opposite side of the spectrum from ‘Chamber 5′. It was a powerful song that will show the trainees’ burning passion into debuting. The song’s choreography emits intensity and sexiness. The eliminations for the Concept Test will be based on the producers’ evaluation. 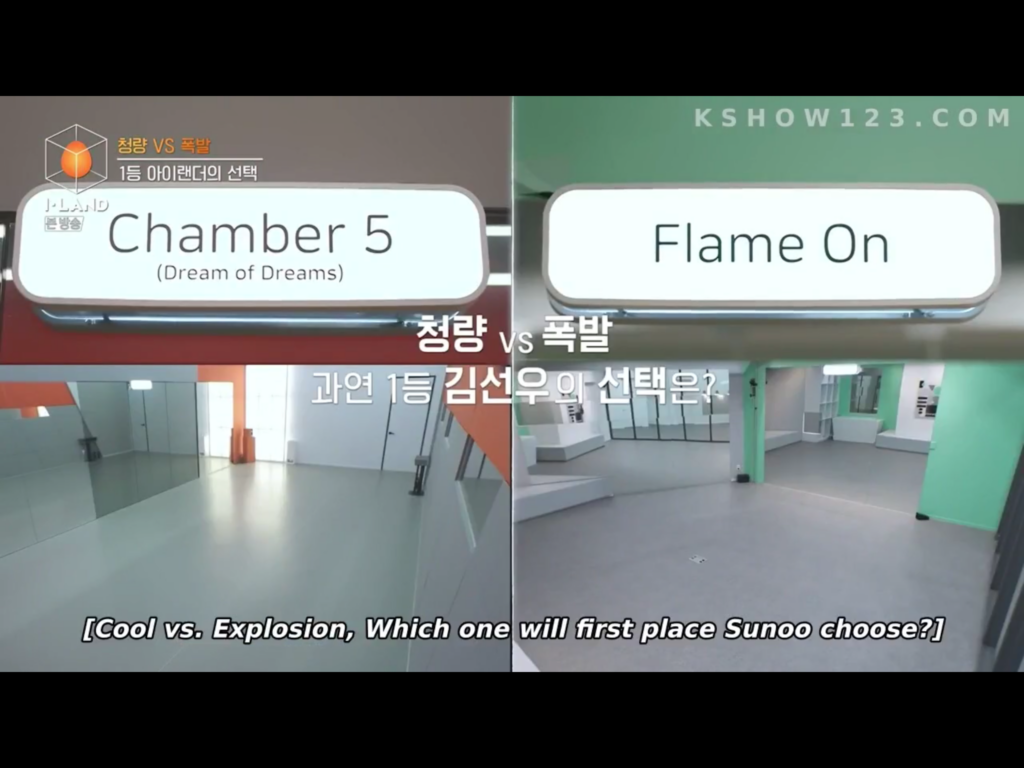 Since Sunoo had won the benefits from the Seventeen mini mission, he chose ‘Chamber 5 (Dream of Dreams) for himself. For his team, he picked Heeseung, Jake, Taki, and Jungwon. The rest of the members are then put into ‘Flame On.’

We get an inside look into ‘Chamber 5’ unit’s practice. Sunoo was deemed the facial-expression-leader, as he was the best in showing off perfect facial expressions for the performances. The rest of the members practice their cuteness as it would be an advantage to their song. Heeseung mentioned this was his first time tackling a refreshing concept and this was his chance to show a different side to himself. Each of the boys improve themselves and grown to be more natural in showing off their cuteness. 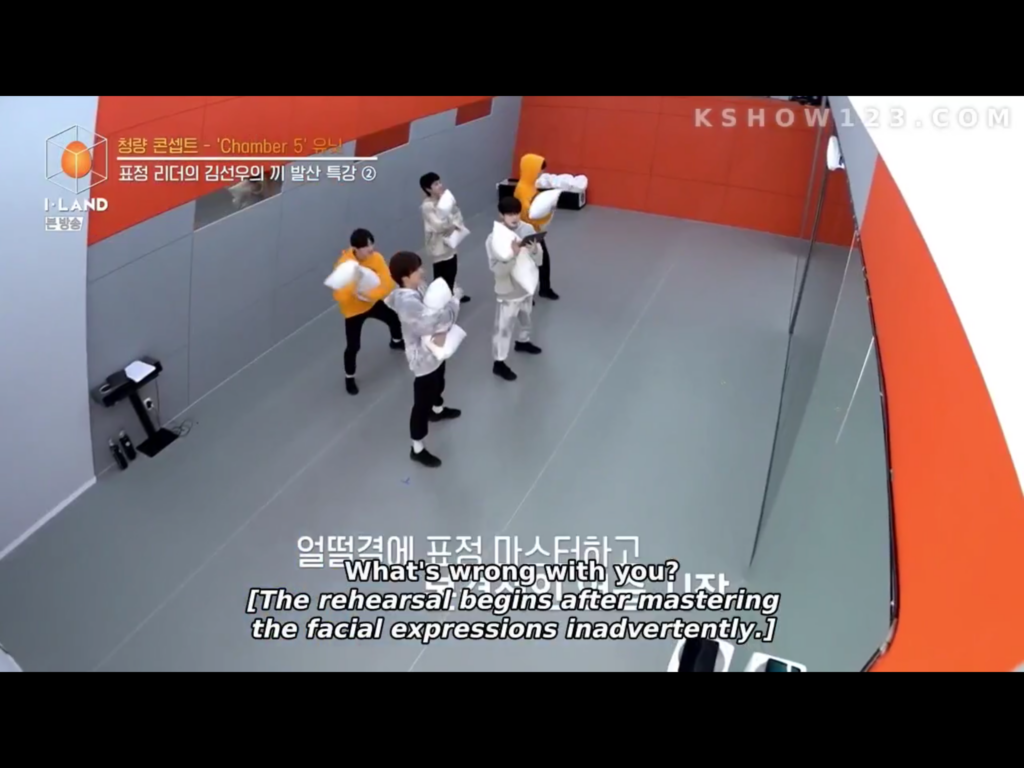 The ‘Flame On’ unit begin their practice by assigning their leader. As Hanbin recommended K to be the leader, he shocked everyone by declining the position.

From last episode, we saw how his leading style had lead to his team to be uncomfortable around him. K reevaluated himself and decided he would rather have someone else lead the team this time around. He then recommended Sunghoon as leader, as he had been able to show his great work ethics. From there, Sunghoon was appointed as ‘Flame On’ unit’s leader. 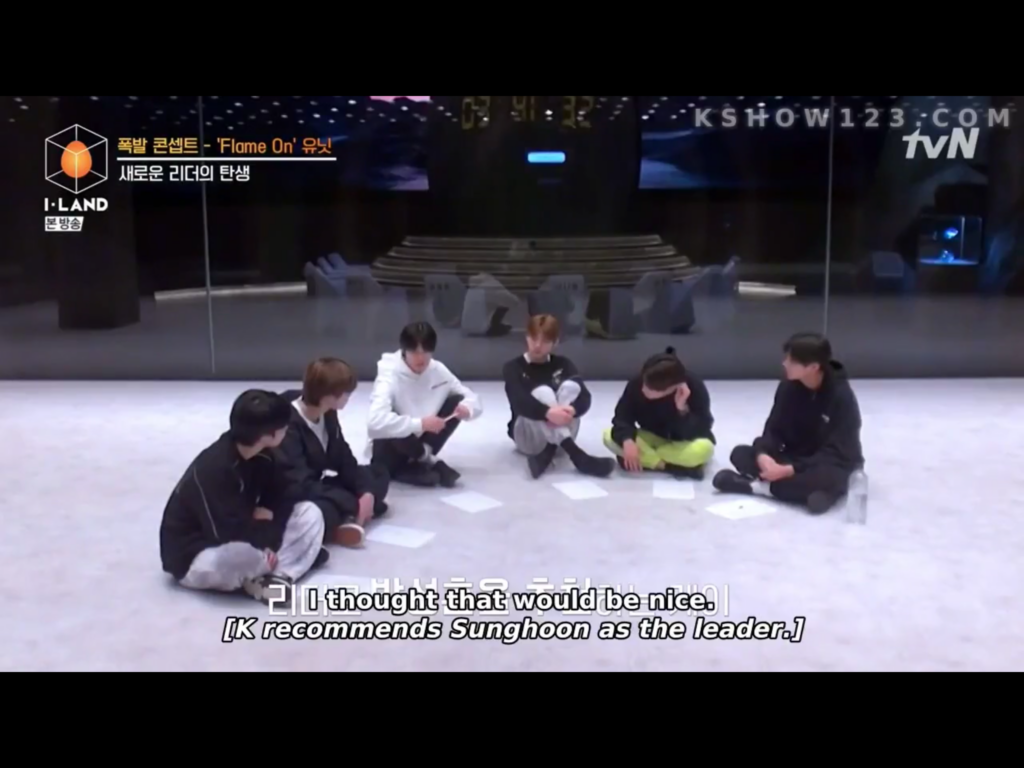 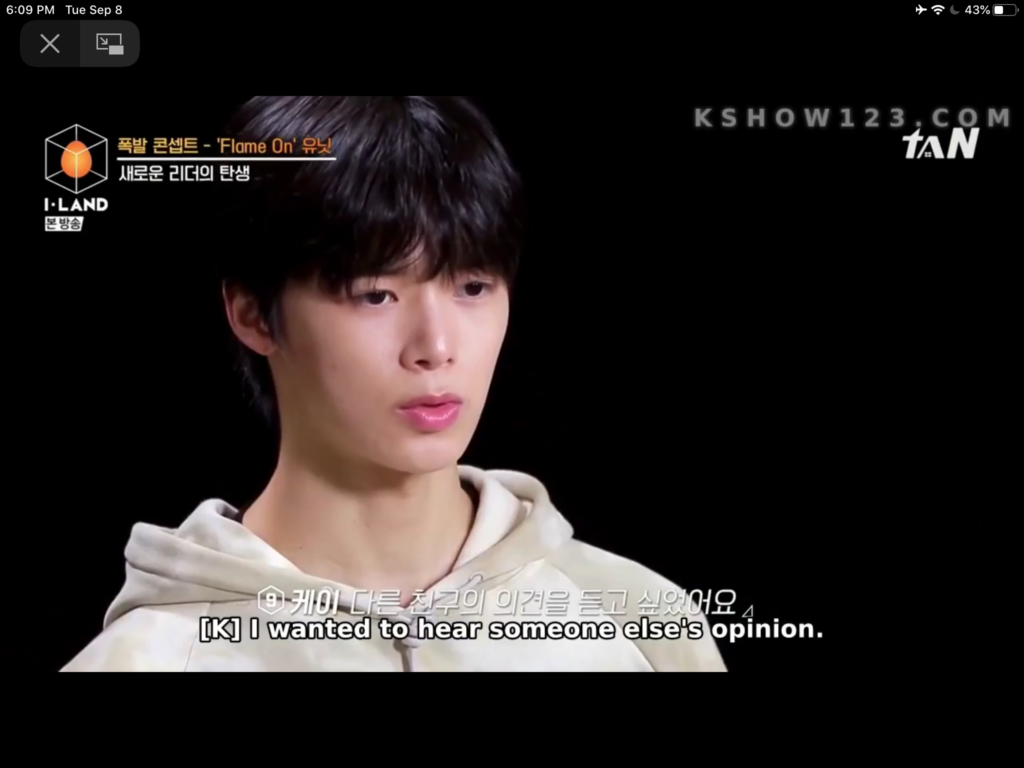 We see that K is hesitating more in voicing his thoughts for the team. As his members suggested he do part 1, he was reluctant to accept. He was taking his other member’s thoughts into consideration, and I believe that was a good growth in K to do that.

However, it was saddening to see how Jay had prepared himself to be the one eliminated this time around, as he was currently ranked 11th from the midway point. He wanted to everything he can to help his teammates. Jay noted that he would want to do the best he can for the benefit of ‘Flame On’ and leave without any other regrets.

With all the thoughts of being eliminated, Jay went ahead and wrote letters to his fellow I-Landers, since he wouldn’t be able to say everything he wanted to if he were to leave. 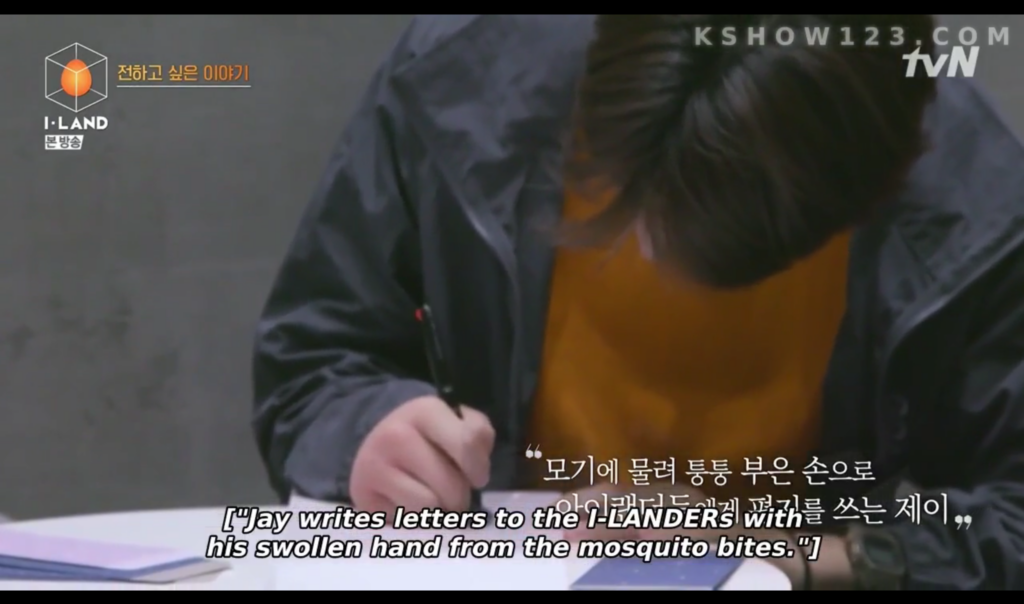 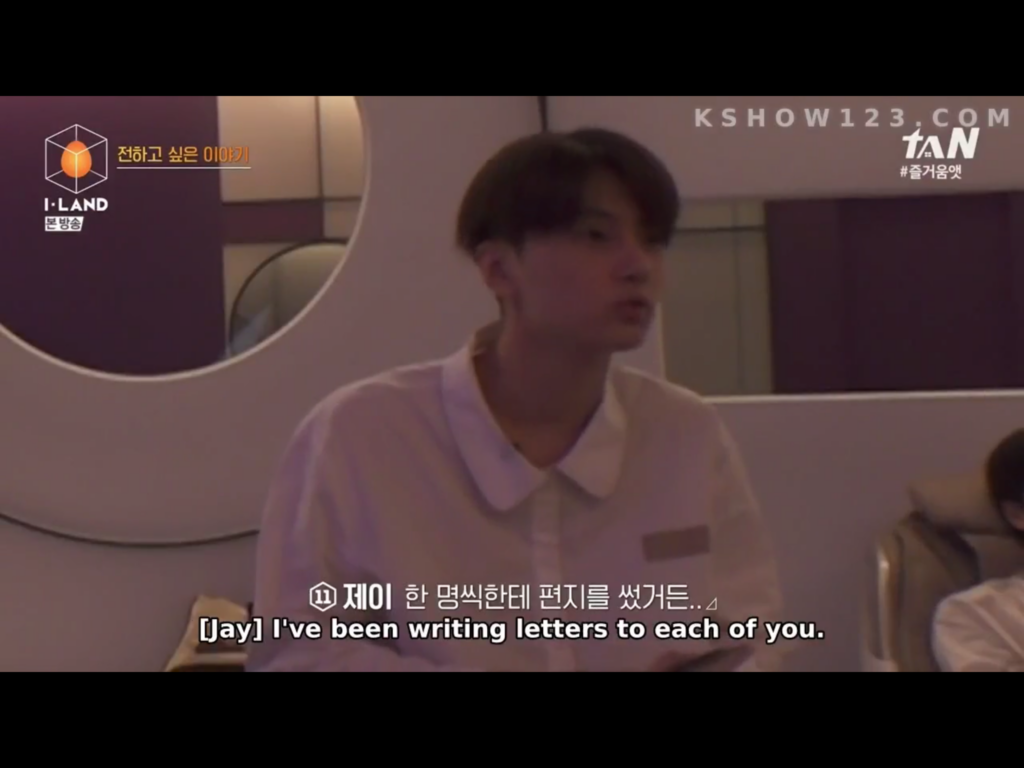 The scene shifts back to the I-Lander’s night outside while watching the fan videos. One questions popped up on screen asking, “What do you want to tell the members the most before the elimination announcement?” Every I-Lander had a video assigned to one other person, voicing their true thoughts. They all noted how amazing the other was and brought up memories of all the good times they had together. It was a bittersweet moment, in which they all shared the same feelings of sadness and hope for their future. 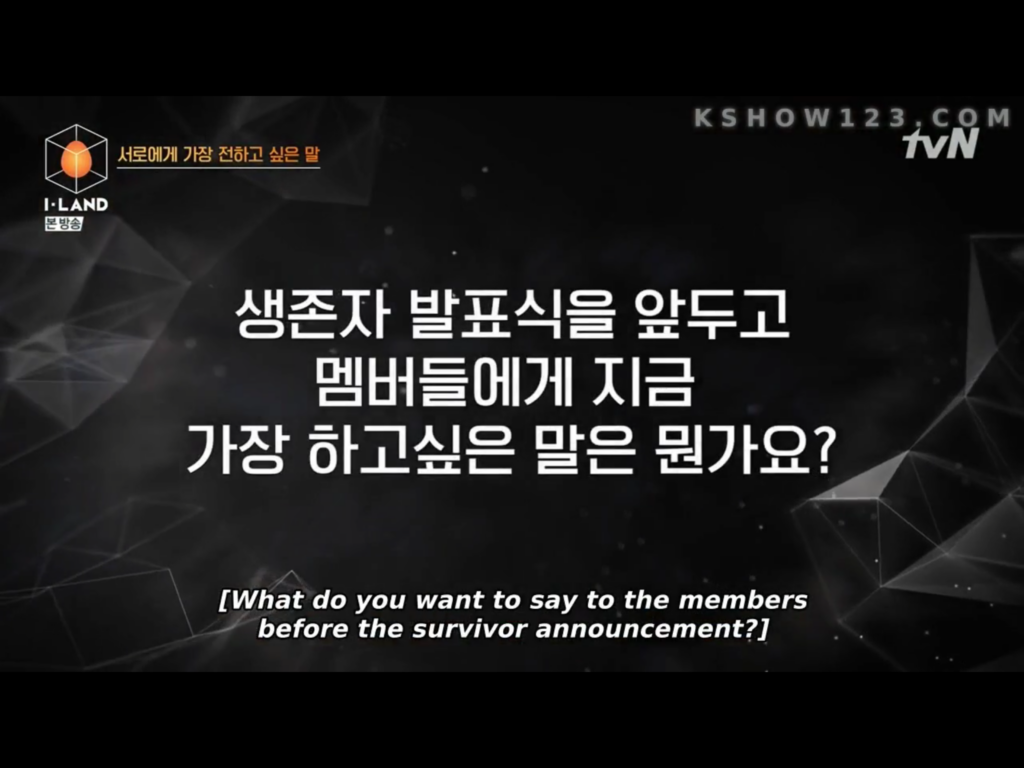 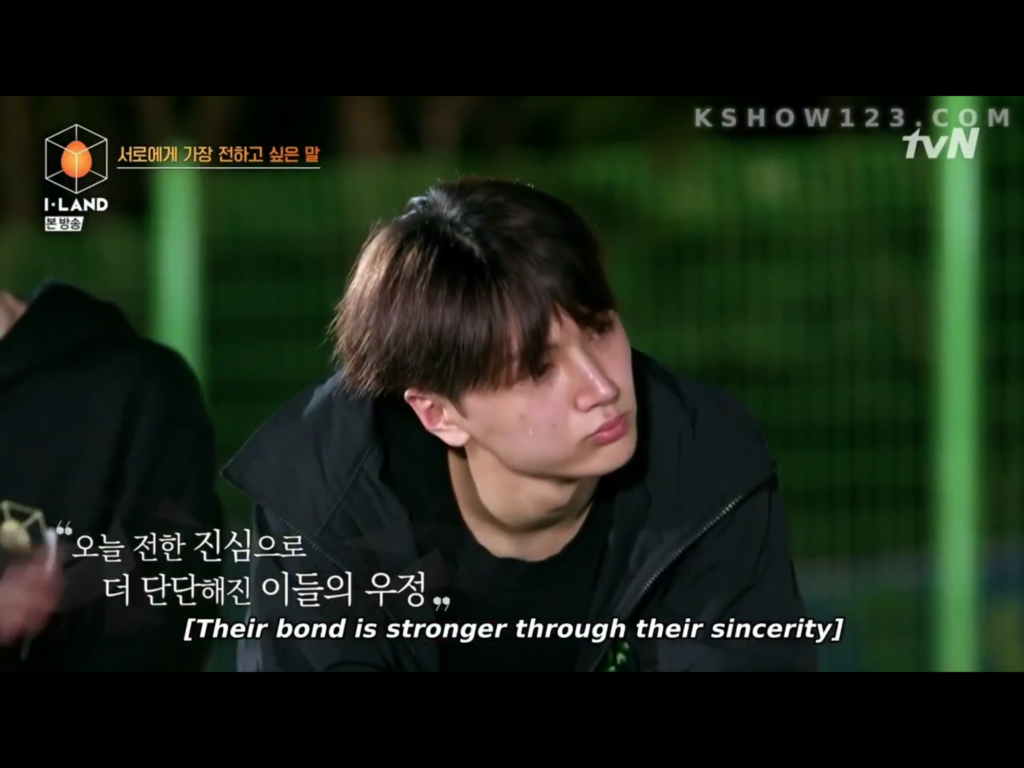 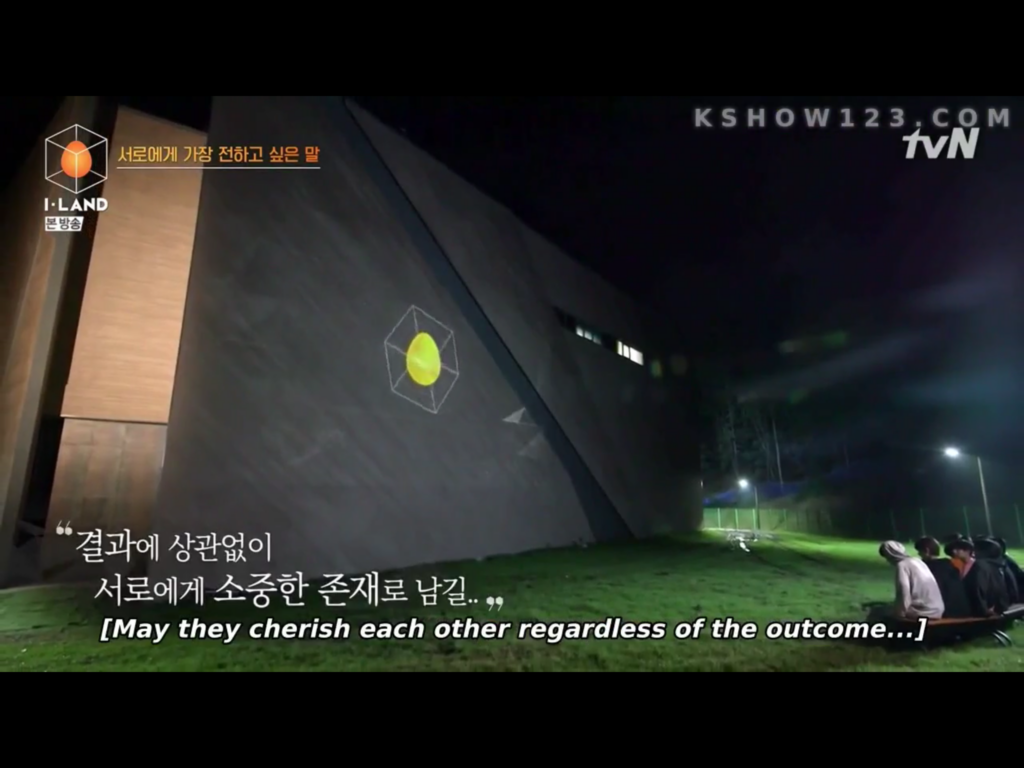 The dreaded eliminations have finally come. Bang Sihyuk brought up a good point that while eliminations can be heartbreaking and frustrating since the boys’ put in all their best work into the performances, being able to participate on I-Land gave them an experience they would never get despite how long they trained. What they learned on the survival show would help them in the long run for the dream to be idols.

Fans from 177 countries have participated in the voting. The rankings again have showed its surprises with its drastic changes. The final global vote ranking are as listed:

Jay and Hanbin shocked everyone with their higher ranks. while Sunghoon and Jungwon gotten ranks lower than expected. Unfortunately in the end, Taki was the second dropout of I-Land Part 2. As saddened as everyone was by the elimination, Bang Sihyuk puts in one last word of advice for Taki, as this was not the end of his journey. 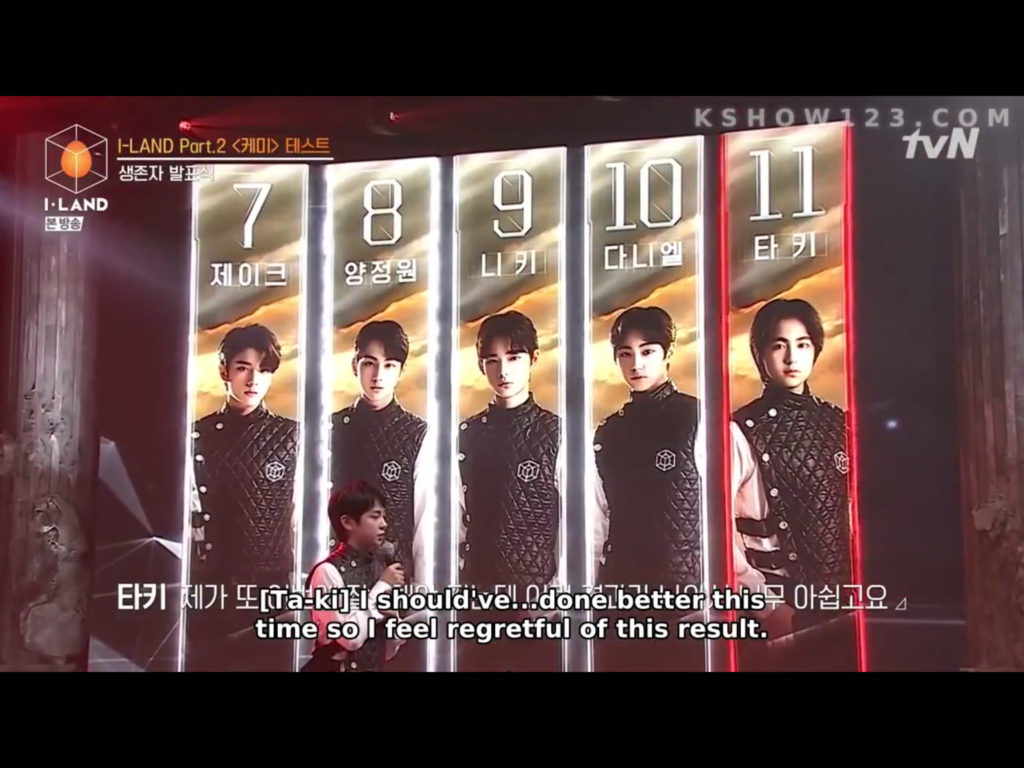 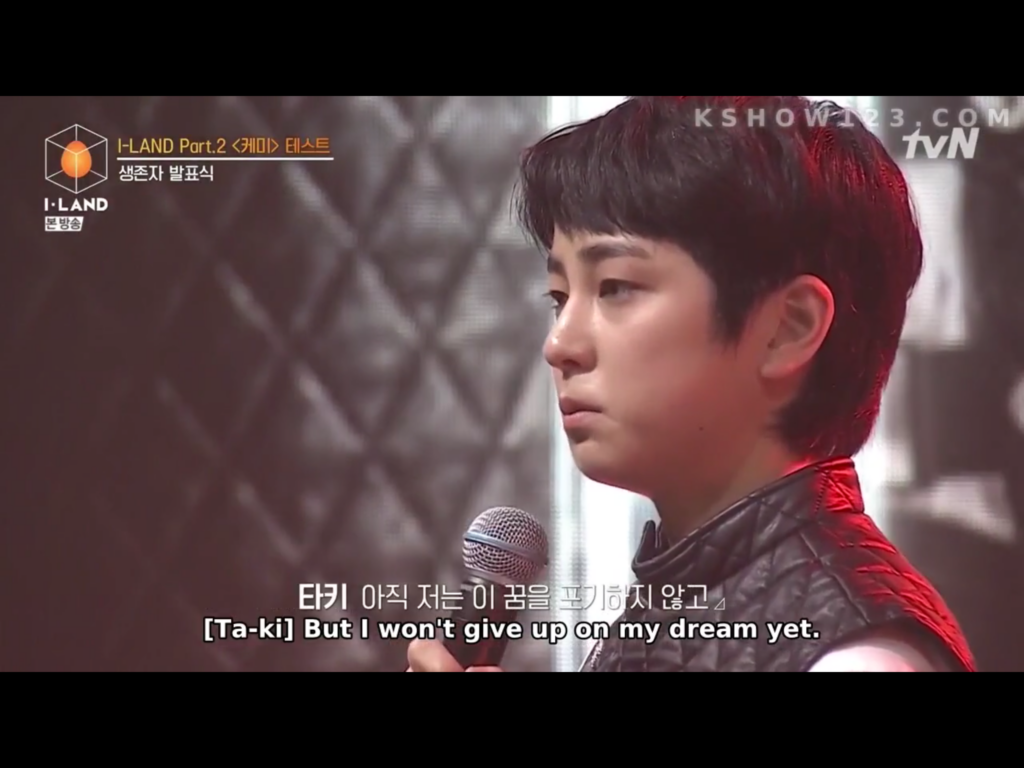 What are your thoughts about Episode 10?

In the next episode, we’ll be able to see the performances for the Concept Test, as well as the eliminations based off of producers’ choice. Make sure to watch it the upcoming Friday, 11 PM KST. Also, don’t forget to vote for your favorite trainee to push him to his debut on Weverse!