Hailing from the city that never sleeps, Chantel Nicole is an American singer-songwriter that has been steadily making waves in the kpop and pop music scene. Today we’ll talk to her about her latest project, what inspires her music, and more! 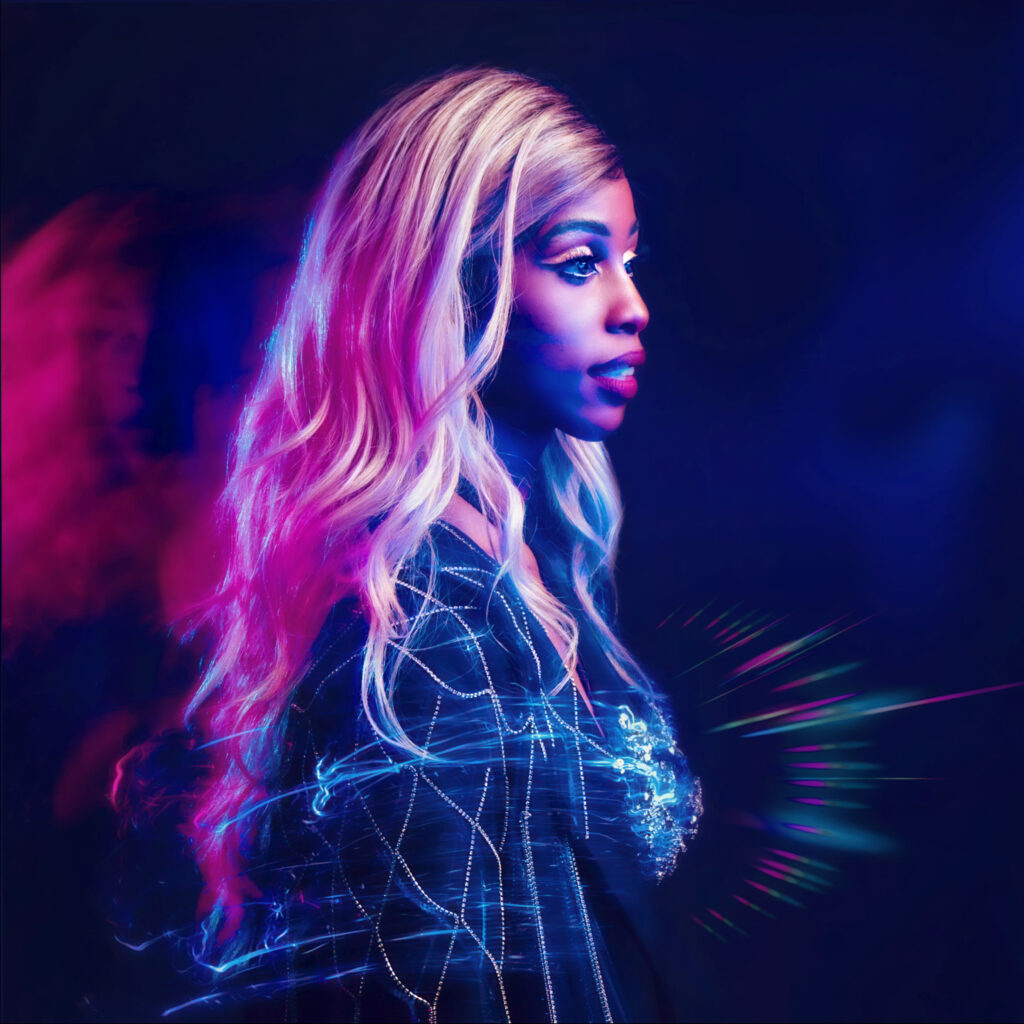 TS: Congratulations on your new release! Can you tell us more about the meaning behind “Here I Am?”

Chantel Nicole: The idea for the song was inspired by the childhood animation Sailor Moon, and I take on the persona of a “Damsel in This Dress” ready to save the heart of the one she loves.

Storytelling is a trademark in my writing. The first verse is asking the person: “How many times has she lied?” I carry on giving this person advice, being passive with my approach. The second verse is stronger–both vocally and lyrically, I berate the bad behavior and tell the person WHY I am better. In the end, I comfort this person with my affection, “I will be there,” when she won’t be.

Also, “It’s not just about saving someone from a bad relationship but my proclamation to the world: You want something exciting and new? HERE I AM. I’m asserting myself and inviting listeners to do the same.”

TS: Is your upcoming project “CHROMA” the start of a new era?

Chantel Nicole: Yes, CHROMA is the new era! Chroma is the purity or intensity of a color.  I wanted each song to represent a certain color–truly entice the viewer and listeners and appeal to all of their senses. I want this era to embody Chromesthesia( a sound-to-color synesthesia) is a type of cognitive interaction in which sound evokes an experience of color, shape, and movement. 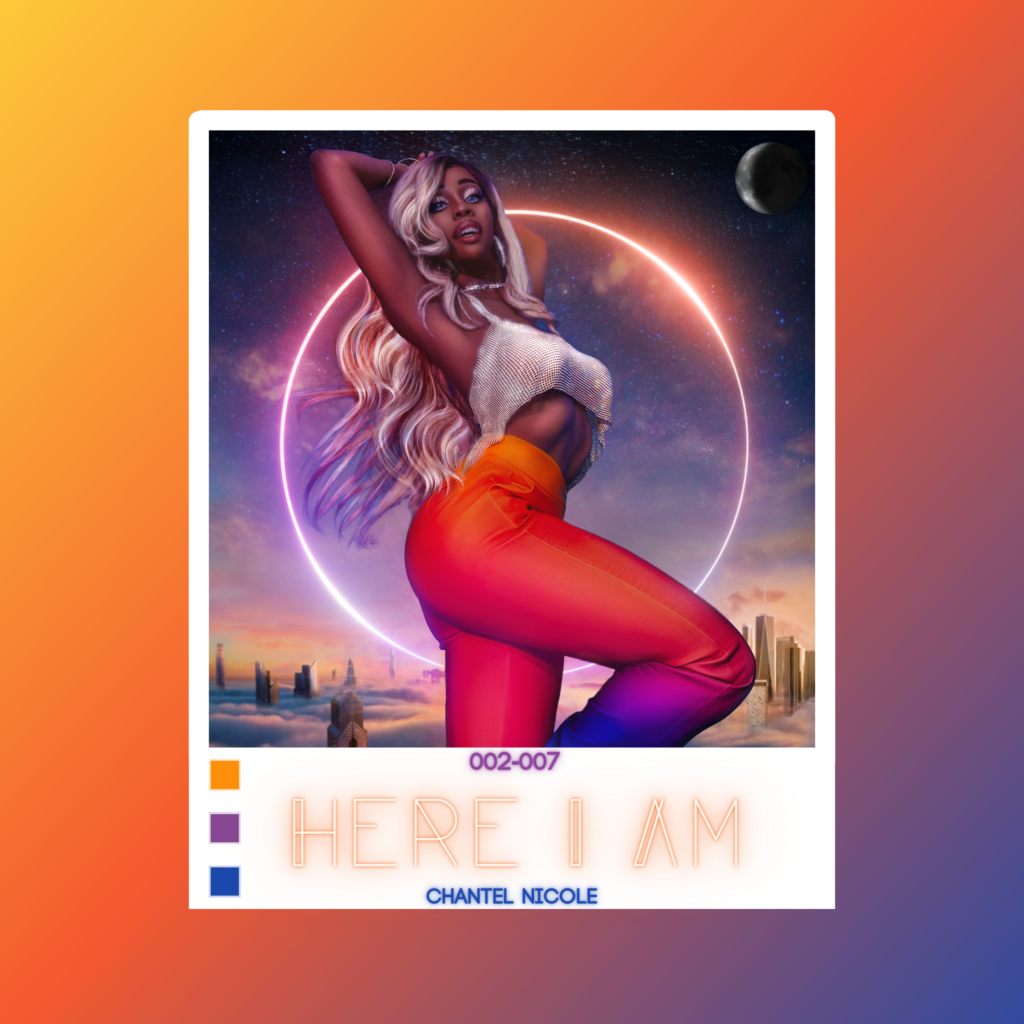 Each song has CHANTONE–my version of Pantone. The buzz single “Like It” (2019) was yellow and green, representing happiness and spontaneity and the heart chakras, respectively. The song is subtle, but the lyrics are lively and sung both in Spanish and English.

For “Here I Am,” I’d describe the Chantone as “Golden Blue Hour.” It’s an orange to blue gradient that I believe encompasses the whole “fighting evil by moonlight, winning love by daylight” inspiration of the song. It’s warm and inviting, sensual and cool.

I truly want to exude the radiance I feel when I perform. I am approaching the pop soundscape with a quirky and vibrant presentation. I really want to strip away from the monolith of stereotypes imposed on black women in music/media. In

TS: When and why did you start dancing?

Chantel Nicole: I wish I could tell you that when I was born, I wanted to be a dancer. That I came out doing the moonwalk, but that wasn’t the case. I wanted to be like Shirley Chislom or Dr. Mae Jaemison and achieve something noteworthy via astrology or politics. I started dancing in 2001-2002, I believe. I was young and super green. I knew nothing aside from what I saw on television. That being said, I won’t say that the idea of dancing never appealed to me. I just don’t remember it being my life’s goal. Not until mom asked me, “Do you want to go to dance school?” I said yes, and after a TEARFUL first class, I’ve been dancing ever since. So although there is no “why I started,” I continued because I wanted to choreograph and/dance for singers on tour or join a dance company.

TS: Who are your musical influences? 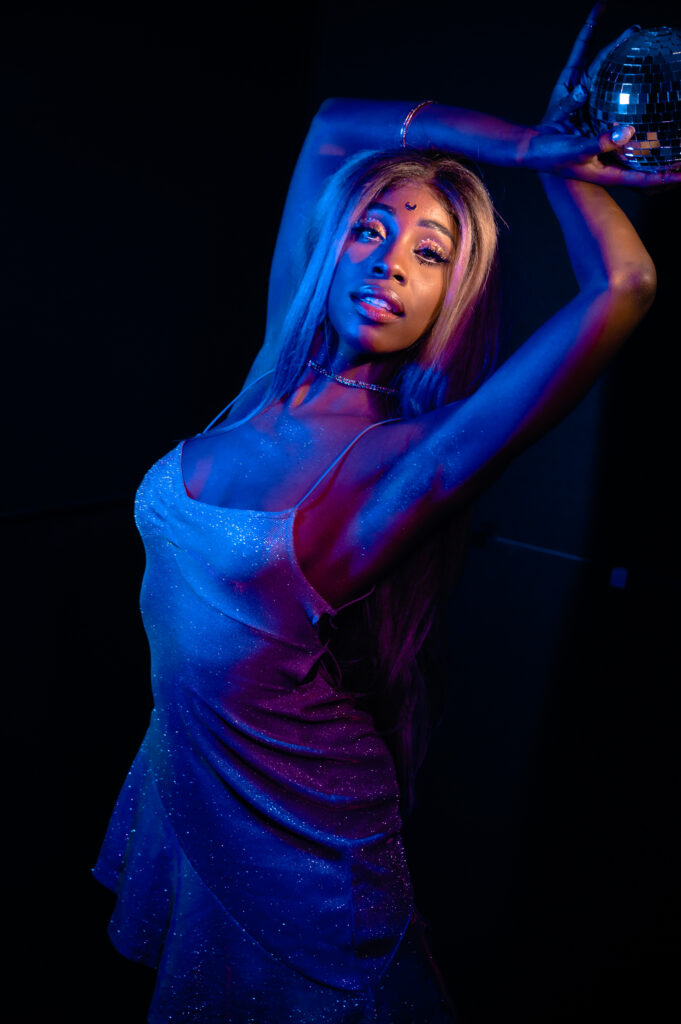 I’ve got so many! From Rock to K-Pop. Seriously. There is a vocal tone by Amy Lee–the operatic style that is so haunting and technical. That helped me sing in falsetto. ALL JANET SONGS helped me work on my blend–the vocal tone between the chest and head voice. When I write a song that needs that thick and sweet sound, I start singing “All 4 You” and find the notes that way. I also have to mention BoA. She is absolutely amazing. Her singing and dancing are awe-inspiring. She’s been in the game for so long. US, China, Japan, and Korea can all listen to her in their language.

Of course, I’ve got some other ones like Britney Spears, Missy Elliot, Teena Marie, Carrie Underwood, Nine Inch Nails, Hayley Williams, and Chester Bennington, to name a few. 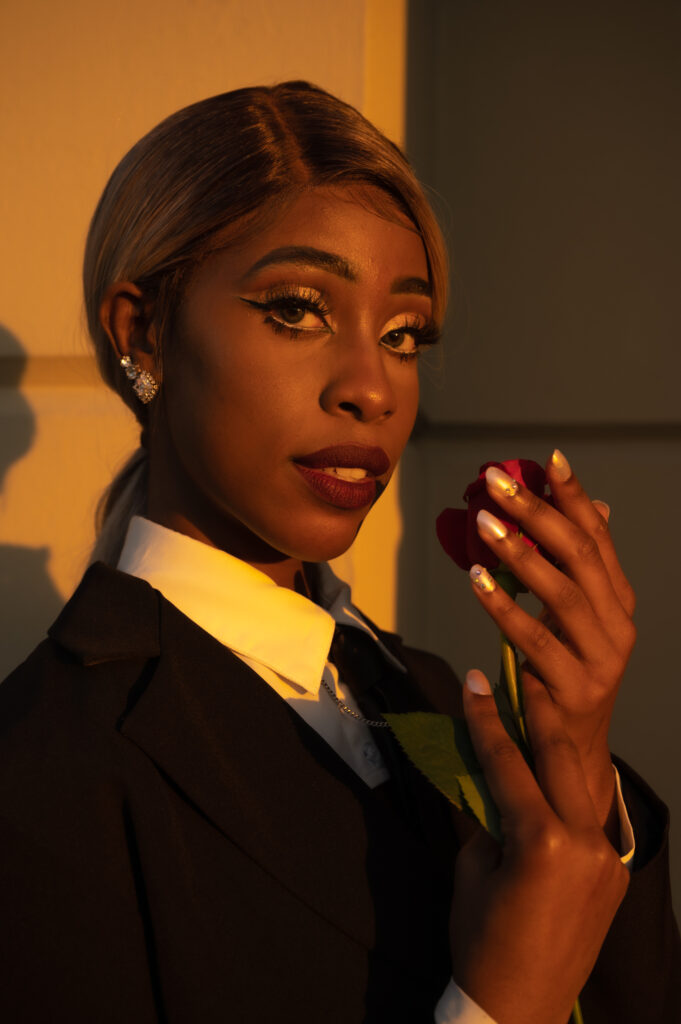 Chantel Nicole: It depends on the day, honestly! I used to just ramble in the Voice Notes App or jot down thoughts in the Notes App. I still do that, but now I give myself the topic. I work well with prompts. I try to conform myself to one and consider cliche phrases here and there. For example, when I was working on my song “I Miss U,” I wanted to write a song about being “crazy in love” and not the cute “uh-oh, uh-oh” Beyonce twerking in an alley kind of crazy.

First, I thought of words like “commitment” and “losing my mind,”  and feeling caught up in those emotions–unable to move on.  So I wrote, “I lost my mind/It’s stuck in time/ asylum so committed.” Or “Nothing lasts forever/ Coz you didn’t want it to ”  I actually wrote those lyrics around 2013 but didn’t use them until 2017, so I’ve got tons of lyrics from high school and early college years that are interesting and clever, like that.

Nowadays, I do the same thing and incorporate storytelling. There is a clear beginning, middle, and end in my music. I don’t typically write songs without a clear destination.

TS: Let’s travel back in time To 2018 when you participated in a flash mob with (G)I-DLE . Can you tell us what your experience was like working with/meeting the group?

Chantel Nicole: I have to give a huge shout to I Love Dance NYC’s MJ Choi for that opportunity and for allowing me to meet FROMIS_9 a year later. Meeting the girls the first time was a huge surprise. I have a Youtube video discussing that WHOLE day in explicit detail, but I’ll tell you they are super tiny! Super cute for sure. They, like many singers, work very hard. 100% at all times. I would like to mention that Soojin was so sweet. She didn’t speak much and stared at me for a while. The other two girls and I were talking to the group. At first, I was a bit uncomfortable and felt self-conscious. Later that day, when I ran into them while eating, Soojin actually spotted me and nudged some of the other girls before waving at me with a sweet smile. I mention that moment to say that I feel bad that she went through the bullying allegations. Whatever happened in the past is truly unknown, but the person she became is beautiful inside and out.

TS: Let’s talk about Black Swan! But, first, tell us how it went with the auditions?

Chantel Nicole: Well, the first round was good. I don’t want to say it was easy because for me–a perfectionist–it wasn’t. I actually sang “I Wanna Dance With Somebody” by Whitney Houston and submitted my original choreography to EXO’s KoKo Bop for the first round. I was not expecting to get to the 2nd round! I can’t say what the next step requires, but it’s the last step before final decisions.

TS: What inspired you to pursue becoming a kpop artist/ joining a girl group?

Chantel Nicole: I’ve liked K-Pop for over a decade now, so the idea of doing K-Pop crossed my mind for sure. Any K-pop fan that says that they never thought about how cool it would be to “Bo Peep, Bo Peep” or “RingDingDingDong” in a space larger than their room or bathroom is probably lying. Haha, I’m kidding, but only by 76%. The other 24% relates to that person learning the lyrics of their favorite song, struggling to catch the footwork in a practice video, or scouring the internet for a replica of the fashion seen in the music videos. As for joining a group, I’ve always wanted to be in a group or duo. Destiny’s Child, Girl’s Aloud, Aly & AJ, 702, The Spice & Cheetah Girls! Who wouldn’t want to be a part of that kind of camaraderie? Being in a girl group would be interesting!

Chantel Nicole: Hmm, good question. If I am chosen, that would be amazing. As for representation, I’d like to present myself as a proper singer and not just a “cool rapper.” Too often, we see black idols becoming rappers. If I’m lucky, I’ll be like Saarah from Banana Lemon and do both. I would want to be seen as a true asset to the group. Like, “Channie can do it all. She’s truly an ace. Altogether, we can become a respectable group full of charm and talent!” I want Luminas to be proud of me, too! They are apprehensive about a new member considering the group’s history, but I hope to assuage them.

TS: After your first round of auditions, what do you think will happen next?

Chantel Nicole: Well, I’ve been lucky enough to garner some attraction to my social medias, so
I’m hoping that the K-pop fans and Luminas can watch/listen to my music and see why I could be a good addition to the K-POp industry! I have to submit the second round of materials and just wait. There are 23 of us left no.

TS: How did the opportunity present itself?/How did you hear about the auditions?

Chantel Nicole: A day after my music video filming, I went to another filming for a friend’s dance video. He choreographed Pretty Savage.
I posted the video without thinking much of it. I just wanted to post a video that allowed me to mention one of the brands that I work with. The next day I went from 39 followers to 10-11K, And the video was a 50K views. A young girl actually mentioned the auditions to me in the comments saying, “DR Music is having auditions. I think you could make it.” So the whole thing was Kismet, I supposed, but I certainly didn’t know of it beforehand. I have to be honest with TS, though. I almost missed that deadline. The company’s inbox was so full! I luckily was able to submit everything before the deadline.

TS: Lastly, taking it back to your latest single. What is one thing you want everyone to know about “Here I Am” and your upcoming project “CHROMA?”

THE SONG IS GOOD!  Seriously, I’m so proud of what this song became. I think it’s better than I Like U! Even Danny Chung said so on ClubHouse when I played it for him, haha!

This song is a combination of K-Pop and R&B, written under the tutelage of Rodnae “Chikk” Bell (EXO, SHINee, Weki Meki), so it was given that extra review from a true topline queen!

I worked hard on the music video and song. I creative directed every little detail down front the hair, makeup, locations, and lighting design. The only things I didn’t do were choreo, videography, and production. I made sure to pay every person involved, so when you all support me, the money goes back into making The C.Nic Route possible.

I want to strip away from the monolith of stereotypes imposed on black women in music/media.  We don’t have to all be “bussin it” or “savage.” This song and this project is going to open your ears and eyes to different textures of life and love. In my world, you can be the multi-faceted person you feel you are. CHROMA is the project where I want you to be free and enjoy the diverse palette that pop has to offer.

Special thanks to Chantel for interviewing with us again! Check out her new single, “Here I Am!”