Meet Lil Cherry & GOLDBUUDA! They’re a sibling rap duo from Miami Florida that have been making waves in the Khip Hop scene with songs like MUKKBANG! & 하늘천따지 1000 Words off the duo’s album [CHEF TALK]. Today, we’ll talk to them about what inspires their music, their latest projects, and more! 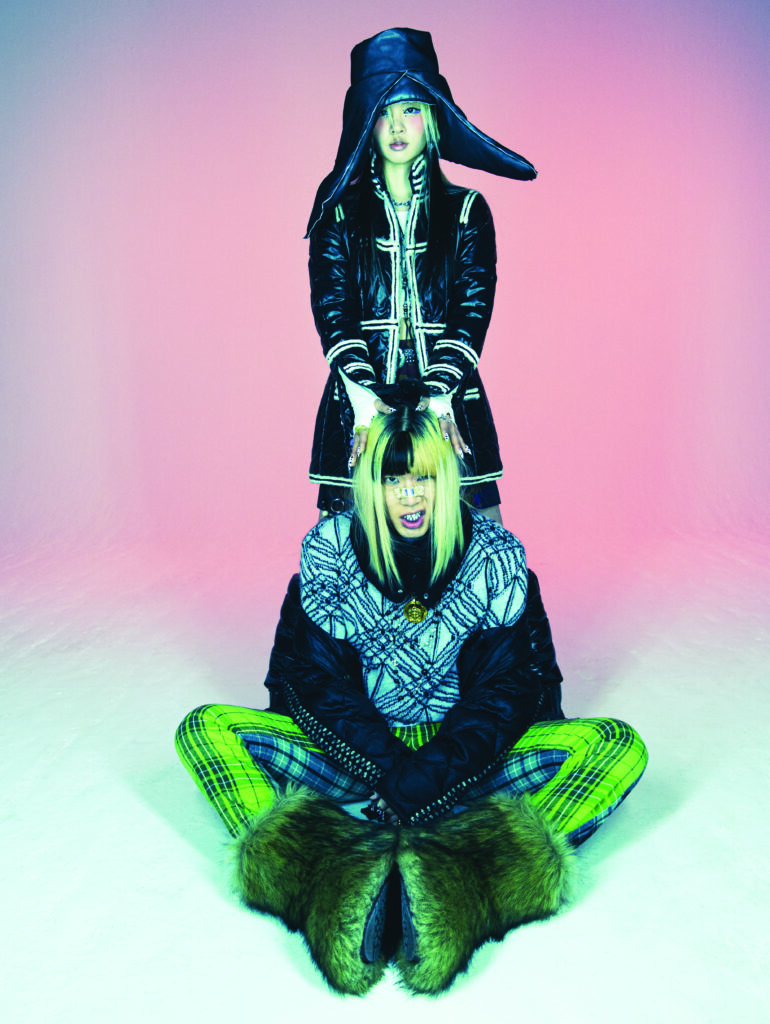 TS: How would you describe your style of music in three words?

TS: What do you enjoy most about the music-making process?

Lil Cherry: I enjoy the element of surprise in music-making: surprising myself and then other people. When I listen to past tracks I’ve made, I sometimes don’t understand how I created those, and I find that stream-of-consciousness creative process amusing and addicting.

GOLDBUUDA: Being able to present a new perspective into the world. To introduce hip-hop culture through an Asian lens.

TS: How did you guys get your stage names, Lil Cherry & GOLDBUUDA?

Lil Cherry: I was going for ‘Lil Onesies’ at first, and I was planning to wear only onesies throughout my career. Then I went shopping for onesies and failed to buy enough clothes. As soon as I threw away that name, ‘Lil Cherry’ came to be. My brother helped me brainstorm through different names.

GOLDBUUDA: I want to let people know Jito Mo didn’t go anywhere- Jito Mo is from GOLDBUUDA. Really respect Buddha’s ethos as a saint- his teachings and values are gold. Also, when I ask my homies in the U.S. which name they prefer, they all picked GOLDBUUDA. But you can call me ‘Jae’ or ‘Jito Mo’ too. For me, name is just a name; what I value most is you reaching out to me.

GOLDBUUDA: I wanted to present the world with our own aesthetics in hip hop by bringing new perspectives instead of tailgating the trend. I want people to feel the uniqueness of the compounds of Asian culture and hip hop culture mixed together because I find that mixture to be rare, and we don’t have enough of this out there yet. And don’t forget: we live in Far East Disney.

Lil Cherry: Various elements within Korean tradition inspire us a lot- from ‘hanja’ to ‘hanbok’ silhouettes to special cuisines and sauces. When BUUDA first showed me the idea of 하늘천따지(1000 Words), I fell in love right away. He recorded his hook first, and I freestyled my part afterward, and everything fell into place together like magic- that’s how we usually work – we don’t need to talk too much about it.

TS: Lil Cherry, can you tell us about your latest song, G! ? (Like, what was the inspiration behind it, and are you a Girls Generation fan?)

Lil Cherry: I love my unnies- shoutout to all my unnies out there. Girls Generation was definitely my favorite kpop group when I was in elementary school, and I was a hardcore fan. I remember listening to their music and seeing their perfectly synchronized dance moves, and wanting to become the 10th member. So that was the initial inspiration of the song, and before ‘G!’ became what you hear now, it was a poem first, called ‘10th Member of Girls Generation’.

TS: GOLDBUUDA, what do you want your music to say about you?

GOLDBUUDA: ‘New Wave Dangoon.’ ‘Dangoon’ is a Korean legend who helped to build the foundations of Korea. So when I say ‘dangoon,’ I want my music to say that  I am the new wave expert bringing specialized sauce to the music scene.

TS: What made you guys want to become a rapper?

Lil Cherry: I started making music by accident. During my third year in college, I was back home in Seoul for the holidays, and the day after I returned, BUUDA invited me to his room that had transformed into a studio. He asked me to freestyle over his beat, and I took out my journal with all my recent poetry I had been writing, and I chose one of my love poems. I added melody to it, and that became my first track, “Motorola.”

GOLDBUUDA: Funny thing is, I never thought I would become a rapper. My initial goal was to become a director in the hip-hop scene. I experienced and lived through all four elements of hip hop: bboying, graffiti, dj’ing, and emceeing. Back when I was in the U.S. I never thought I would become a rapper. But after arriving to Korea, I realized I wanted people to enjoy hip-hop the way I listened and experienced growing up in Miami, Florida. I felt the responsibility as a true hip-hop lover.

TS: What was your first reaction to getting a cosign from Saweetie?/ How did it make you two feel?

GOLDBUUDA: I was so happy, and I was hoping my idol Quavo watched it too, but that’s a done story already. I was amazed- it was so unexpected. She even said she bought the music- thanks for making Thousand Words a thousand k special!

TS: Where do you guys find your artistic inspiration for your music videos?

Lil Cherry: I believe that the best music videos are ones that are personalized with the artists’ stories melted inside. My favorite music videos we’ve released are those personal ones as well: usually, when I write my songs and poetry, there are specific visual elements that come to mind. I take those elements and explain them to the creative director as much as I can, and I love this process of seeing how the director infuses my ideas with their visual direction. We’ve worked with various directors in the past, and we love seeing how our initial ideas and goals come to fuse with the directors’ own take since everyone brings a unique color palette and different cultural experiences to the table as well.

GOLDBUUDA: All over the world. I’m trying to get inspiration from everywhere just by living life. What I try to make sure of is not to get biased too much- I want to absorb as many things as possible from all around the world. That’s why my hobby is watching the world news. Recently I got inspired from this book called “The Lost Book of Enki: Memoris and Prophecies of an Extraterrestrial God” by Zecharia Sitchin, where they delve into Sumerians mystic history.

TS: What’s the secret behind your great teamwork?

Lil Cherry: We meet in a sonic universe where we don’t need to talk much- we let our music talk for ourselves.

GOLDBUUDA: Being able to absorb and understand each other instead of raising questions.

TS: Which songs of yours would you recommend to others that have never heard your music before?

TS: Lil Cherry, I heard you use to write a lot of poems. Do you still write poetry?

TS: Who are your musical influences?

GOLDBUUDA: Mankind, us, the human, the earthlings.

Lil Cherry: Pharrell and his positive messages he shares with the world. Bigklit and her fearless ultimatum energy. Swae Lee and his romance poetry. Fatoumata Diawara and her peace-giving nature. And my Mom, who is my foundation to everything I create.

TS: GOLDBUUDA, what is your favorite song to perform live?

Make sure to check out GOLDBUUDA and Lil Cherry’s music, notably Lil Cherry’s new double single EVERGREEN + HEART DODUMI. Check it out below!