Lately, more and more K-pop idols are becoming YouTube content creators. From these personal YouTube channels, we get to see more sides to our favorite idols. Of course, there’s more to our faves than just singing and dancing on stage, right?

Here are a few entertaining recommendations you all should check out! You’ll end up on a video-watching binge, guaranteed!

A personal favorite! Two members from the Korean band, N.Flying, Jaehyun and Hun lead the channel, 2IDIOTS. The duo do a variety of challenges that usually end in either complete chaos or in shocking victory. They bring a lot of hilarity with their clashing personalities. And occasionally, their other members (and manager) would join in on the fun and it only gets crazier from there. This channel is your instant stress reliever!

Not only does this channel follow Bomi’s personal life, its basically a variety channel. There are an array of content to watch from the APink member, such as challenges, vlogs, mukbangs, dance covers and many more! The channel truly flaunts off Bomi’s outgoing and bubbly nature. Any watcher wouldn’t be bored going through her content.

One of the first, if not the very first, personal idol YouTube channels I subscribed to. The channel have gone on a journey since the beginning. From once being a vlog/variety channel to what is now Jae’s personal music channel, it is still one to fully invest in! Jae have showed MyDays some of his life in America and his close friendships with other idols. And right now, we are blessed with music projects from Jae. Check out his most recent release, Pacman.

We get an inside look of Solar’s life through her YouTube channel, but it doesn’t only stop at vlogs! Much like Bomi’s channel, the vocalist tackles challenges, ASMR, mukbangs, and other fun content. Just today, she released the first episode to her island survival series, a new project for the channel. It’ll definitely be an interesting watch as more episodes drop.

Rather than fully focusing on Chanyeol himself, it follows the behind-the-scene journey on Studio NNG. Along with his producer friend, MQ, and the NNG team, the content on the YouTube channel plays out like a documentary and viewers get to see from step to step on what building up a studio is like. This channel really showcases the passion Chanyeol has for his music. We have to appreciate a hardworking man!

If you’re into makeup, look no further. Makeup Guru, Lee Suhyun, is the channel to follow! Suhyun has so much natural cuteness that makes her content much different from other beauty YouTubers! She does a good chunk of makeup tutorials, hauls, and beauty recommendations on her channel. Also, getting to hear her angelic singing voice from time to time is a bonus!

This particular one is quite unique compared to other idol YouTube channels! While it does have its occasional vlog here and there, Song focuses more on cooking, eating, and anything related to food! It is surely a channel to make you hungry after watching through it, but isn’t that the fun of food channels? Plus, it’d be a fun activity to cook alongside Chef Song!

JESSICA LAND is like the jack of all trades, you’re not sure what to expect in the next video! Viewers get a variety of videos from the singer. Ranging from song covers to vlogs to fun little creative projects, we get to see a lot of different sides of Jessica Jung.

Okay, this is basically cheating, but I’m mainly pointing out Chenle and Jisung’s This and That series. The series could honestly be on its own YouTube channel and will be worth the subscribe! On This and That, NCT’s youngest members are usually diy-ing or playing games together. It’s cuteness overload with their friendship! (Johnny’s Communication Center also should have a special mention!) 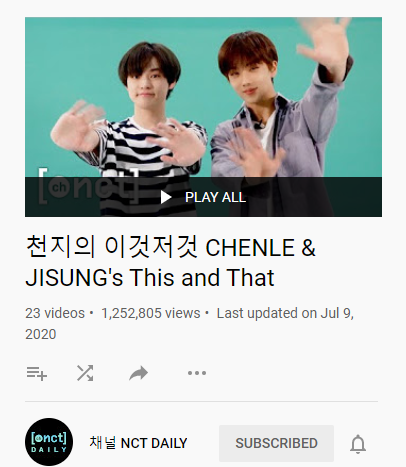