While 2020 changed how we enjoy many different types of entertainment, K-pop continued to be a worldwide cultural phenomenon and one of the most global communities on Twitter today. Fans connected with their favorite K-pop artists and participated in conversations with each other worldwide, setting a new global record of 6.7 billion K-pop related Tweets in 2020. With over 300 K-pop Topics to follow on Twitter, it’s now easier than ever to see and participate in the best conversations every day about the K-pop artists you love.

“Even in a year where the sounds of K-pop were not able to fill the arenas and venues that they typically do, the

#KpopTwitter community set a new worldwide record, and K-pop artists continued to energize their global fanbase on Twitter. Throughout the COVID-19 pandemic last year, Twitter provided the most thrilling social soundtrack for K-Pop fans, and enabled them to share their love for their favorite K-pop artists with their friends, as well as make new ones all over the world,” said YeonJeong Kim, Head of Global K-Pop Partnerships at Twitter.

The markets generating the most buzz about K-pop showed that the genre’s popularity continues to grow in markets where it’s secured a foothold – even pushing new markets to the top. Surging conversations from fans in Indonesia and India generated enough Tweets to push both higher in the 2020 rankings. Indonesia took the #1 spot, and India entering the top 10 for the first time. Despite fierce competition, Brazil and Mexico managed to retain their spots in the top 10, while Spain reached the top 20 for the first time due to the K-pop fans’ passion there.

The top 20 markets Tweeting about K-pop ranked by Tweet Volume in 2020 were:

K-pop popularity on the rise across the world: Top 20 markets by unique voices

Looking at the top 20 markets by unique voices reveals a diverse range of markets, highlighting the K-pop community’s increasingly global nature. K-pop increased its mainstream appeal in several of the largest markets worldwide, as Japan and the USA topped this country list with the most number of people Tweeted about K-pop in 2020. In addition, K-pop fandoms are growing larger globally, with other markets like Turkey, France, and Saudi Arabia moving up this country list.

The top 20 markets Tweeting about K-pop ranked by the number of unique voices in 2020 were:

Even without many events and tours, the biggest K-pop artists continued to drive conversations among their passionate fans. The top most-mentioned artists, including BTS (

@BLACKPINK), all released new music projects for their fans last year to help them get through 2020.

The top 10 most-mentioned K-pop artists on Twitter in 2020 were: 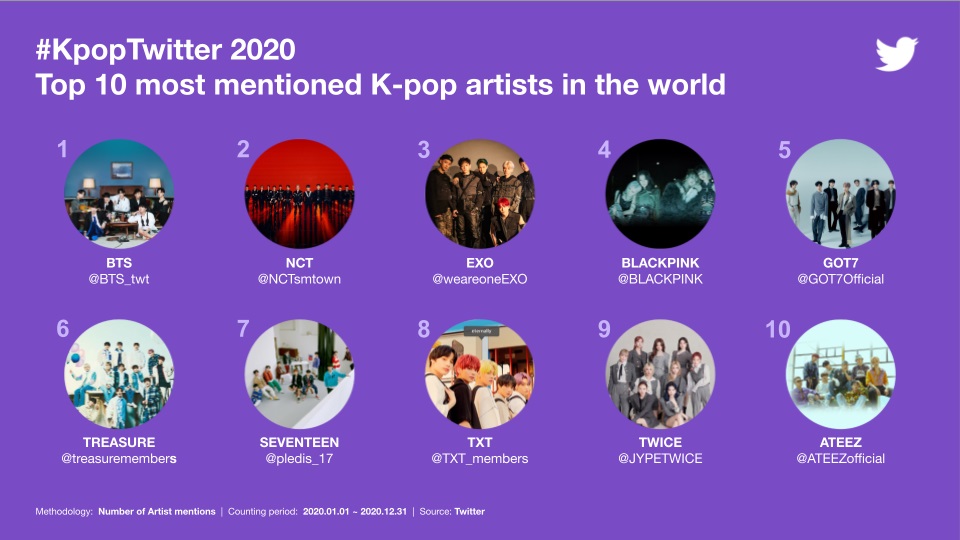 The songs that defined 2020: Most mentioned K-pop songs.

Whether from the early part of 2020 or just before year-end, many different songs helped us make it through 2020. The biggest may not surprise you – by offering “Dynamite” in part for its fans in English-speaking countries, BTS helped make it one of the year’s biggest songs. Like GOT7 and NCT 2020, fans of other groups generated plenty of conversations for their favorite artists’ comeback singles, “Breath” and “RESONANCE,” respectively. 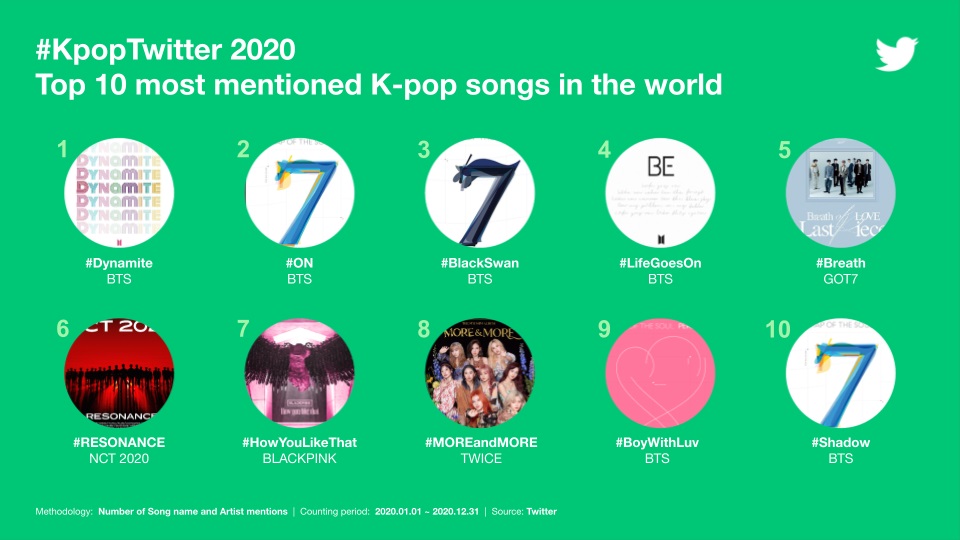 The new kids on the block: Fastest-rising K-pop artists

Exciting artists emerged onto the scene or took flight in 2020, tantalizing fans with buzzworthy teasers and promising debuts. Each artist’s approach was different – from TREASURE’s (

@TXT_members) making their Japanese debut and second EP just months apart. In addition to TREASURE, many of the fastest-rising artists appeared here for the first time, including ENHYPEN (

The top 10 fastest-rising K-pop artists on Twitter in 2020 were: 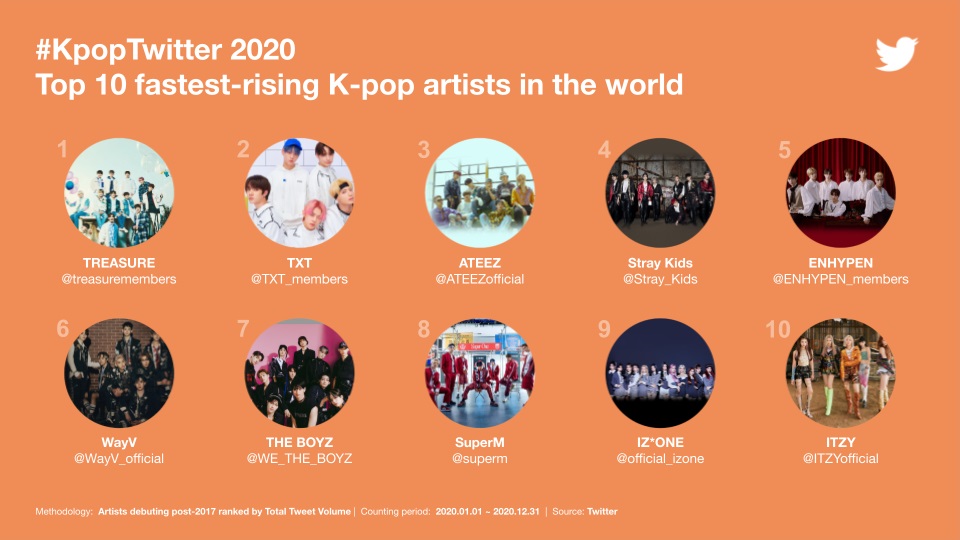 In the new normal, artists found new ways to stay connected with fans to replace the concerts, events, and other activities a typical year would bring. The

#TwitterBlueroom produced many of the most popular live stream viewing opportunities to know the top K-pop artists better.

#TwitterBlueroom gave K-pop artists the ability to talk live directly to their fans on Twitter, as well as a chance to hear exclusive behind-the-scenes stories and other insights not available elsewhere. Sometimes, artists like BLACKPINK (

@BLACKPINK) even used the

#TwitterBlueroom to give their fans content that they personalized for them.

To close out 2020, Twitter partnered with MAMA (Mnet ASIAN MUSIC AWARDS) to bring K-pop fans’ favorite artists closer to them than ever before. The hashtags

#MAMA2020 topped Twitter real-time trends worldwide and in 68 markets, with a whopping 126 million Tweets related to 2020 MAMA generated from October 29 to December 6.

#2020MAMA also marked the first time using the ‘Twitter Stanbot,’ the exclusive high quality, slow-motion videos of K-pop artists and K-drama casts, with these videos viewable only on the official

More than music, K-pop idols and fans band together for social causes on Twitter

#YearOnTwitter, the second most-Tweeted hashtag of 2020 was

#BlackLivesMatter as the world mobilized and amplified the need for equality and social justice. K-pop fans and their favorite idols participated in the movement by mobilizing others to use the hashtag and join the cause and raise funds through initiatives like

#KpopTwitter community’s involvement in the

#TwitterBlueroom, alongside other only-on-Twitter online content, will give fans to follow their favorites closely until concerts and events come back in full force. And with comebacks tours already starting, there’s a full year of music and your favorite idols ahead. Join the

#KpopTwitter conversation today to see and talk about your favorite K-Pop idols and stay updated with other K-Pop fans around the world!

Twitter (NYSE: TWTR) is what’s happening and what people are talking about right now. To learn more, visit