Super Junior- D&E’s 4th mini Special album “BAD LIAR” has finally unveiled itself to the public and fans flying through the roof with excitement. According to SM Entertainment, the album is available on streaming platforms including Spotify, Apple Music, QQ Music, Melon, etc. As well as the album, the music video for the title track “No Love” was released as well. 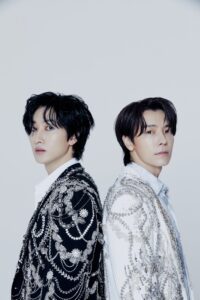 “BAD LIAR” has seven different songs to keep you going for the rest of the month. The songs include; “No Love”, “B.A.D”, “Contact”, “To you, Tomorrow”, “Change”, “Off-Line”, and a bonus track from Shindong “What is your name?”. One of my personal favorites from the album is “Change”. The songs give heavy summer and clear, sunny day vibes. It makes me feel as if I am enjoying a fun day at the mall with my friends. The vibes are so nostalgic and overwhelmingly happy.

SM Entertainment clarifies that “BAD LIAR” is an “…extension of the fourth mini-album ‘Bad Blood’ concept released on September 3rd.” The title song “No Love” talks about the attraction one feels when they see another beautiful person.

This new song brought on a new refreshing feel to D&E. In this song, their voices mesh so nice together as they create a track that is sure to remain on the charts for quite a while. SM mentions that “…’ No Love’ is a genre of electronic dance with flock synths and swing snares..” creating a fun and hypnotizing in return.

After the release of the 4th mini album “BAD BLOOD”, Super Junior- D&E “…occupies the top of iTunes top album charts in 25 regions around the world…”; this special album will be no exception.

If you haven’t already, check out Super Junior – D&E’s 4th special mini-album on Spotify here. Also, watch the music video to “No Love” below!